From our professional life…

The songs for the new album are almost done.
In February, Martha opened a photo exhibition entitled Greek Moments at the Bím Gallery.

Martha & Tena decided to prepare a fifth CD with Greek songs.
In May they organized a Greek evening, the proceeds of which were donated to the Kapka naděje Foundation Fund, more here.
In December they returned to the Semafor Theater. In the sold-out hall they sang their hits and added songs from the theater, see Gallery.
Martha also began taking pictures for the new cookbook. In September, therefore, she went directly to the Greek Karpathos.

In September, Martha filmed a sequel to the Ostrava Television series „Postřehy odjinud“ (Observations from elsewhere), this time from the islands of Rhodes, Karpathos and Crete, more here.
Tena opened her 13th chamber as part of the Czech Television series, more here.
M&T celebrated 50 years of their professional singing career and received the CD „50 Years in Two,“ more here and see discography. 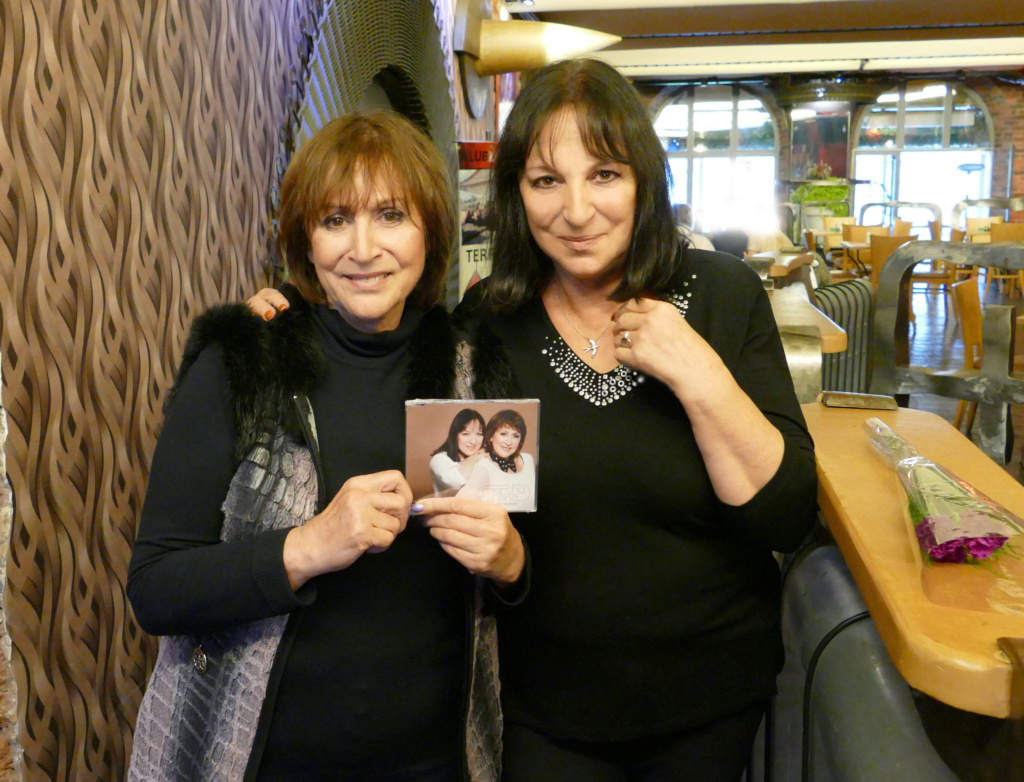 Martha & Tena got the Multiplatinum record for more than 30,000 CDs sold. LP and MC albums „The Most Beautiful Greek Songs.“
They perform concerts in the Czech Republic and Slovakia.
Supraphon record label released the second reedition of Martha’s album „Kresby tuší“ with 4 unreleased bonuses, see discography. 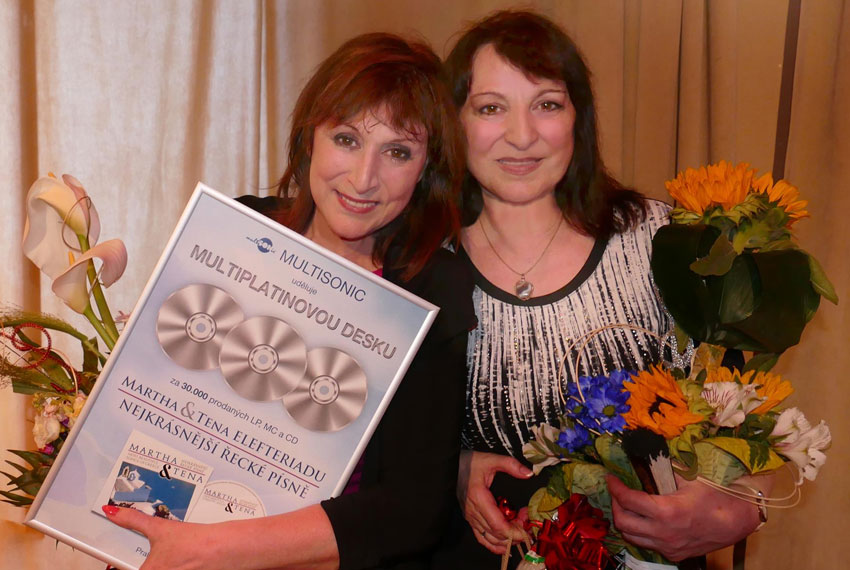 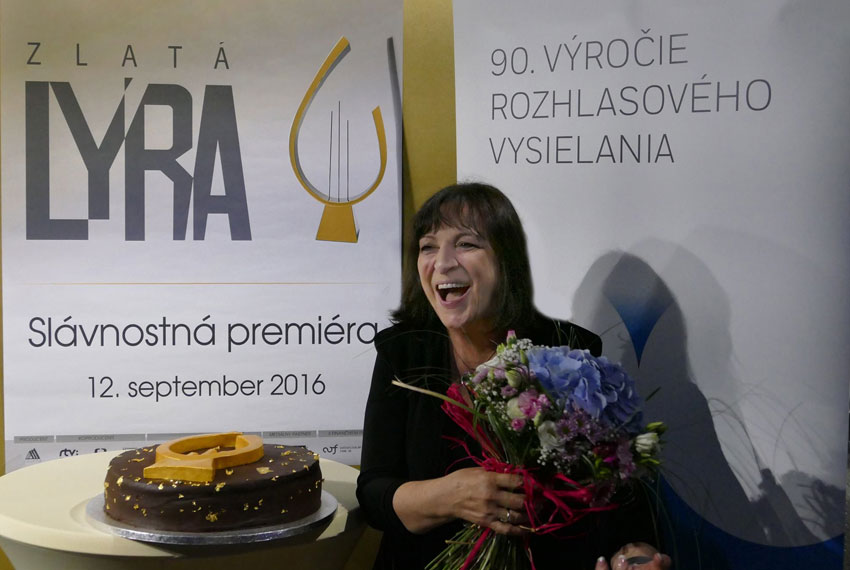 The Publishing house Ikar published the autobiographical book „Martha a Tena dvojhlasně“ is based the two parts of which are a distinct expression of the view of the life of each of them, more here. 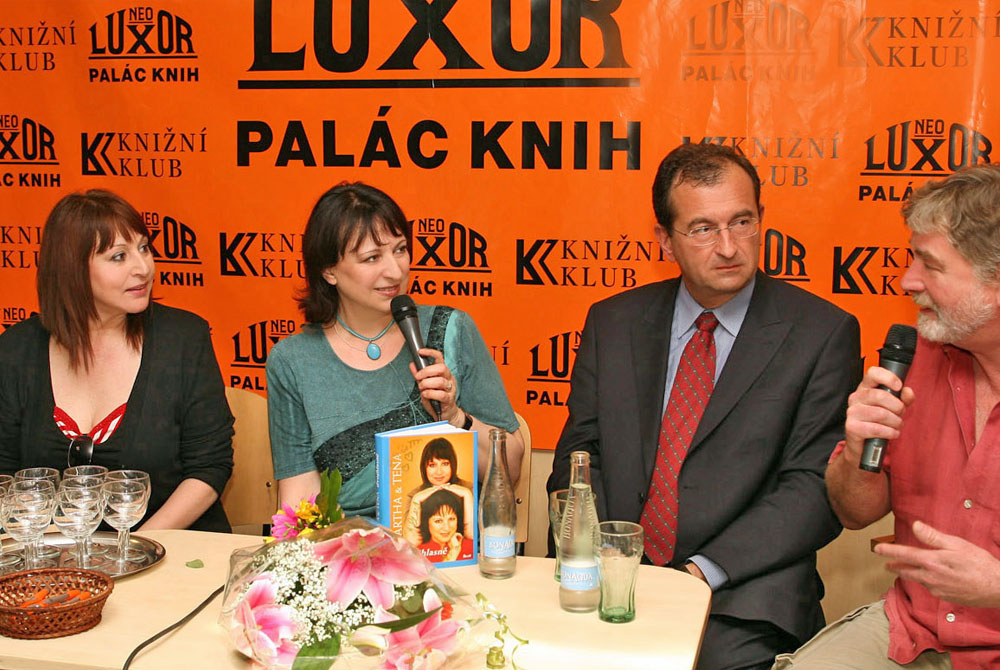 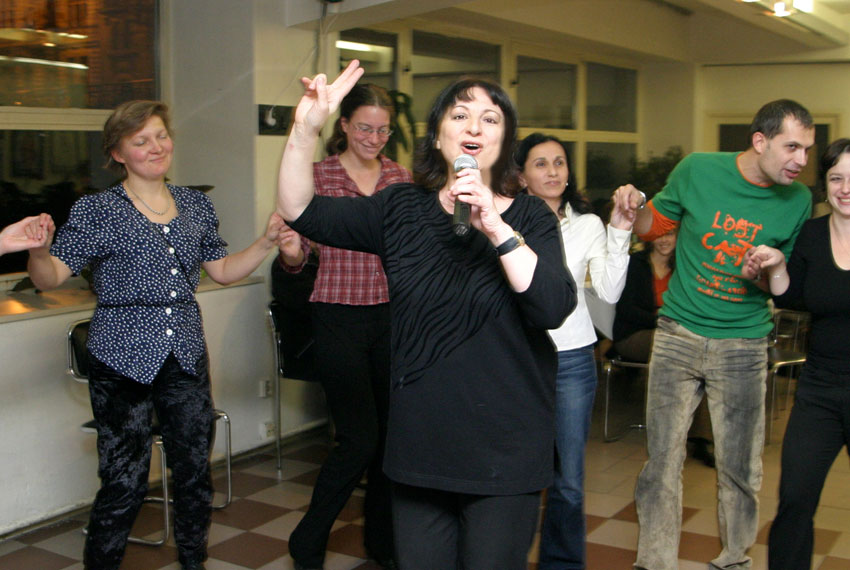 Martha & Tena  together with Jannis Asarlidis (buzuki) and Thomas Petsinis (guitar) are setting up the Colchid group. In their repertoire was Greek folk songs and music influenced by the famous era of Rebetiko, the urban folk of the 1920s. 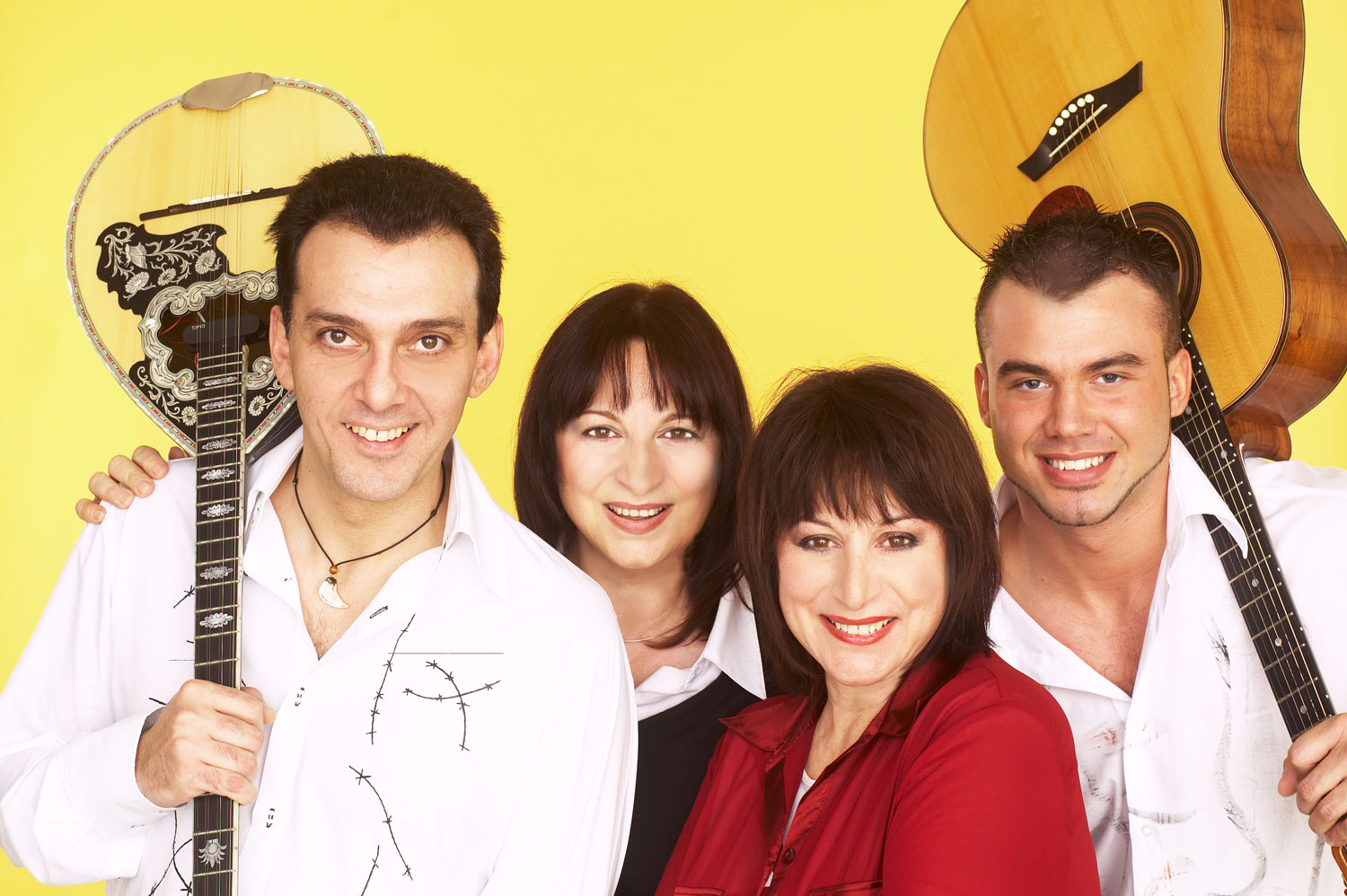 BMG released the second CD with the Greek repertoire „Děti z Pirea,“ see discography
Martha & Tena maked videos for songs „Agapise me“, „Thalassino trifyli“ and „Kokino garifalo“ in Crete Island. You can watch them on our YouTube channel.

Martha & Tena and Mrs. Georgie Zervas founded the Filhelen Foundation, which is dedicated to the promotion and dissemination of Greek culture.
At the same time Martha &Tena returned to singing together and they released their first CD „The Most Beautiful Greek Songs“ (Multisonic record label), see discography.
For Czech TV they made music film“Řecko ’92„. They presented some songs from the album.

Martha cooperated with the Czechoslovak Television Orchestra of Václav Zahradník.
Martha guested, for example with the song „Už na východě svítá“, in the program „Inventura Semaforu“, which accompanied the history of the theater.
Martha was also a guest at the Ypsilon Theater and performed with Mark Eben on „Evenings under the Lamp“. Here she sang Greek folk ballads and with Mark songs from his LP „Tiché písně do tmy..“
Martha released a successful single with the hit „Proč přicházíš tak pozdě, lásko“ (Why are you so late, love) and planned to release her second solo album. In 1989, however, she signed politics petition „Několik vět“ and was banned from public performance, more here.

Martha started guest appearances in the programs of Václav Neckář with the group Bacily, where she also performed the Dylan repertoire and singing in Greek.

On December 4, Tena gave birth to the twins Mark and Tena.
In the second half of the 1980s Tena (with twins) continued to perform in Scandinavia. In the repertoire she had world hits from Madonna (Cherish, Vogue), Jacksons 5 (Blame It On The Boogie), The Pointer Sisters (I’m So Excited) and Crystal Gayle (Don’t Make My Brown Eyes) Blue) …

Martha & Tena with the band of Juraj Čierný released their new album „…a desky dál stárnou“ („…and the albums keep getting older“), see discography,  for Czech and Slovak fans. Song of the same name was a big hit. It is the Czech version of Bucks Fizz’s „Making Your Mind Up“.
They performed for the fourth time on song-festival „Bratislavská lyra“, this time with the song „Dancing, Watch Up“.
Martha also performed at concerts of the Bodlák-Vondrák-Polák trio and interpreted Orten’s poems and songs of ancient China.
Between 1983 and 1985 Martha performed the Brno TV Studio B program.

In addition to performing in Scandinavia, they recorded and performed Martha & Tena in Slovakia. Several new songs („Stop hesitating“, „Buy your dream“, „Gateway to childhood“, „Friend of mine“) were created to form the basis of the new LP. However, it was not realized until three years later. Most of these songs remained unreleased in the archives until 2018, when some of them were released on the promo CD „50 Years in Two“. 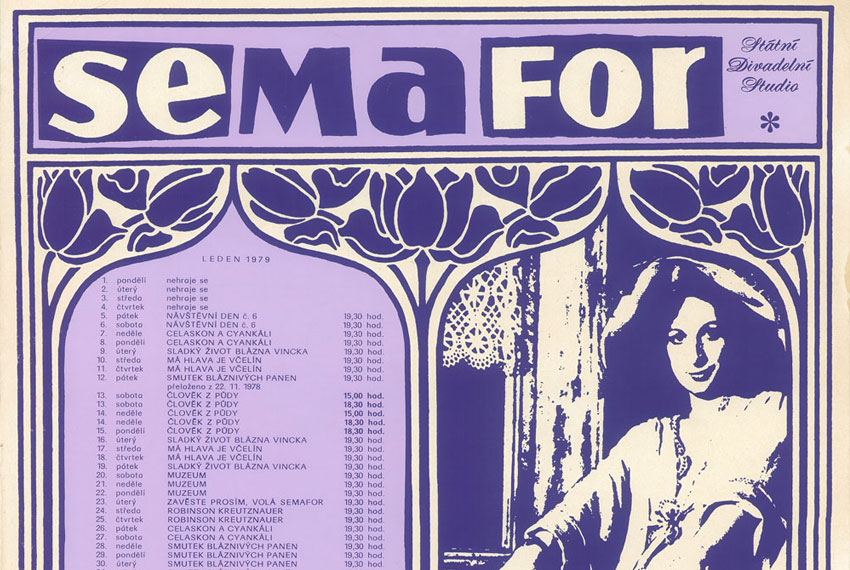 In 1978 Martha & Tena performed in Oslo, Norway and in 1979 in Stockholm, Sweden with the band of Slovak musician Juraj Čierný (Tena’s husband). Tena stayed in Scandinavia in the years to come, she sang the world repertoire with Exi Band and First Choice Band. Martha joined them later. 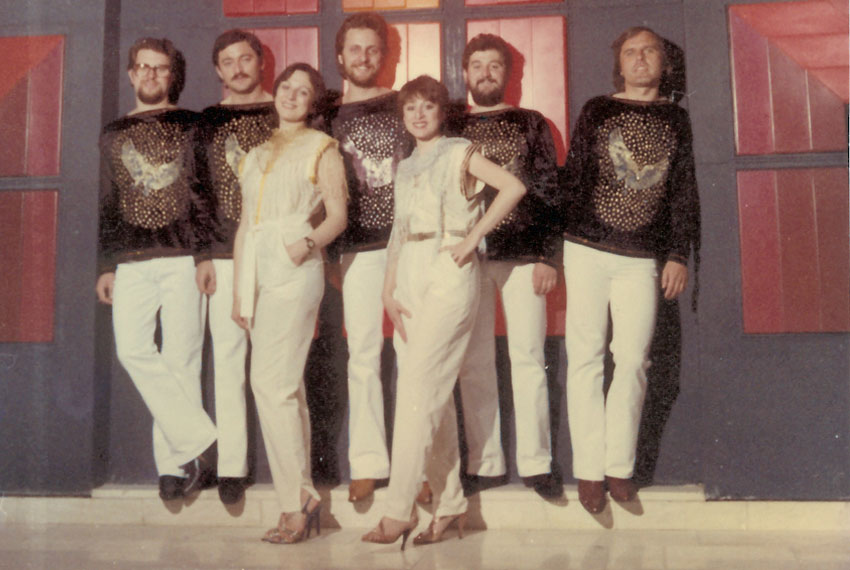 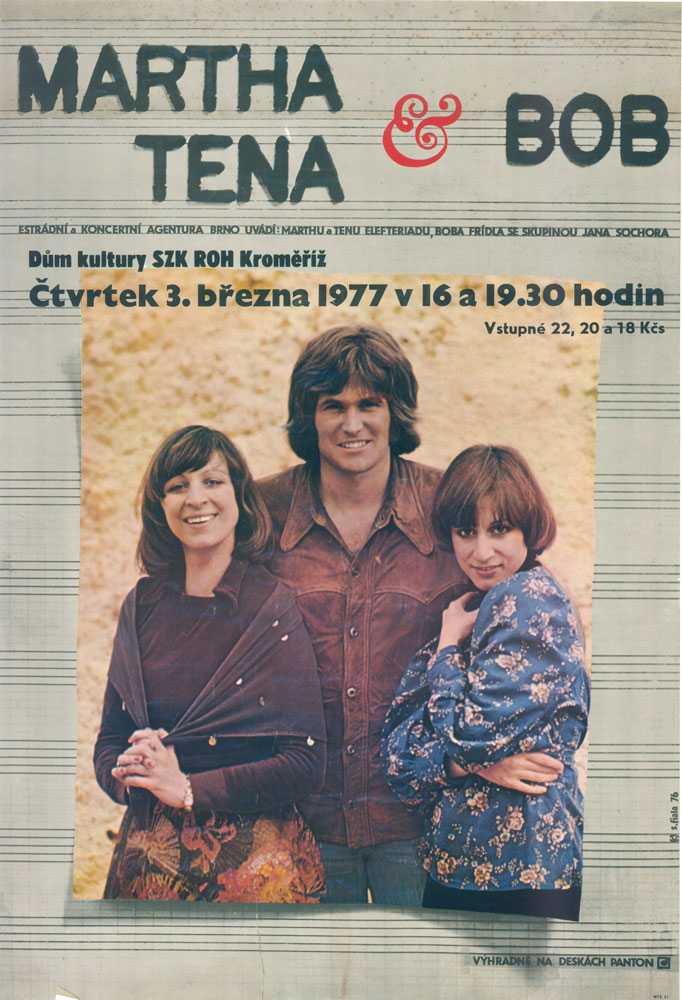 Opavia brought special wafers to the market and named them after both sisters – TENA nut and chocolate nut MARTA. 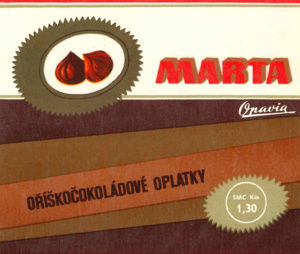 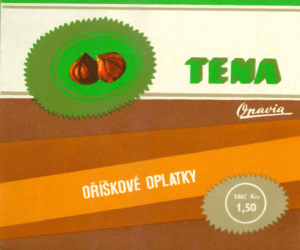 Martha & Tena released their fourth LP „Ať se múzy poperou“ („Let the Muses Fight On“) and won the bronze prize at „Bratislava Lyre“ festival. They visited their native Greece and perfomed in Elli Evangelidu’s TV show „Synchroni Eva„. In Greece they got inspiration for their next album with famous Greek songs. 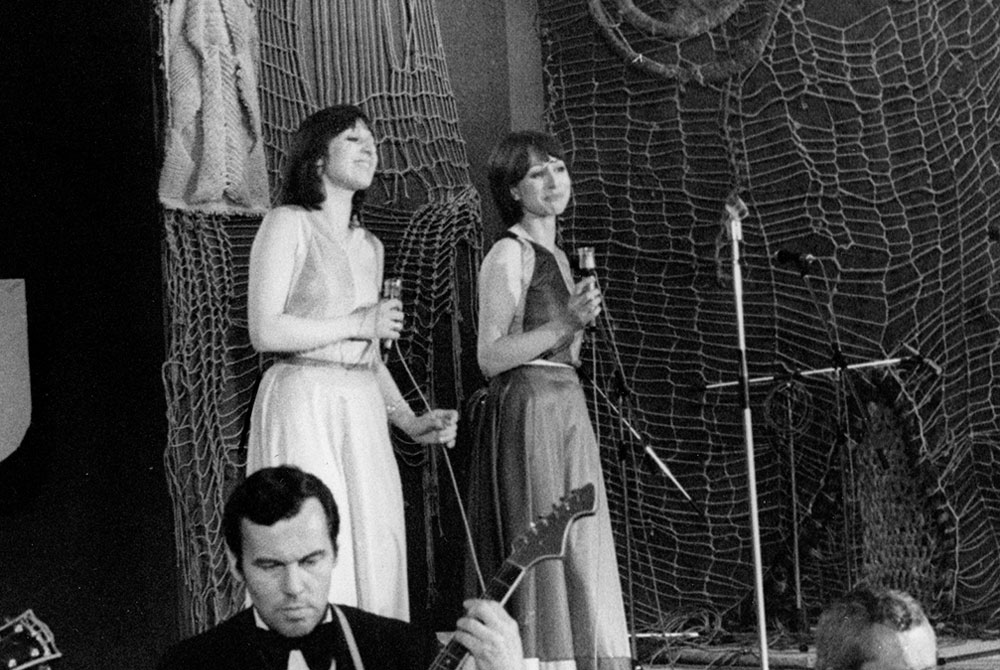 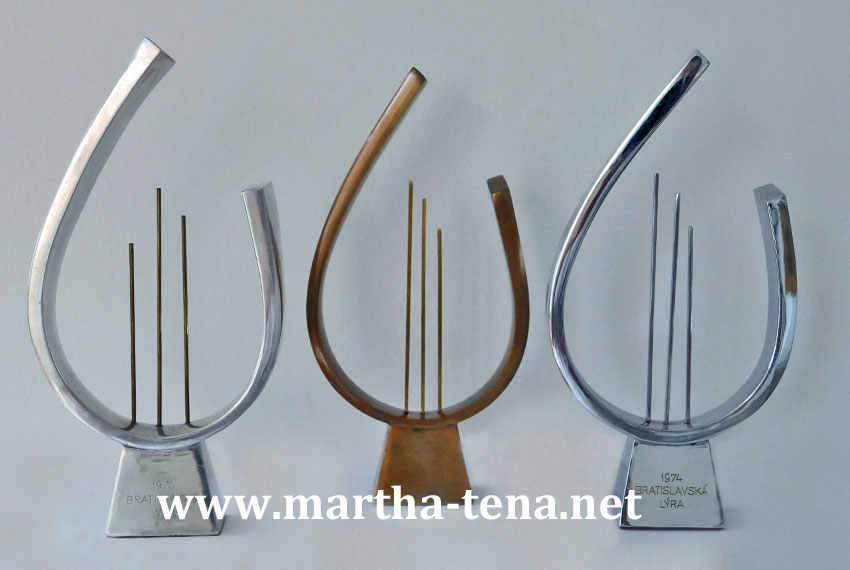 Martha & Tena were successful at „Bratislava Lyre“ festival again. Their hit song „Náměstí“ (A Square) got a silver prize. Martha & Tena represented Czechoslovakia at a festival in Polish Sopot again. They performed a few songs in TV show in Sofia, Bulgaria. 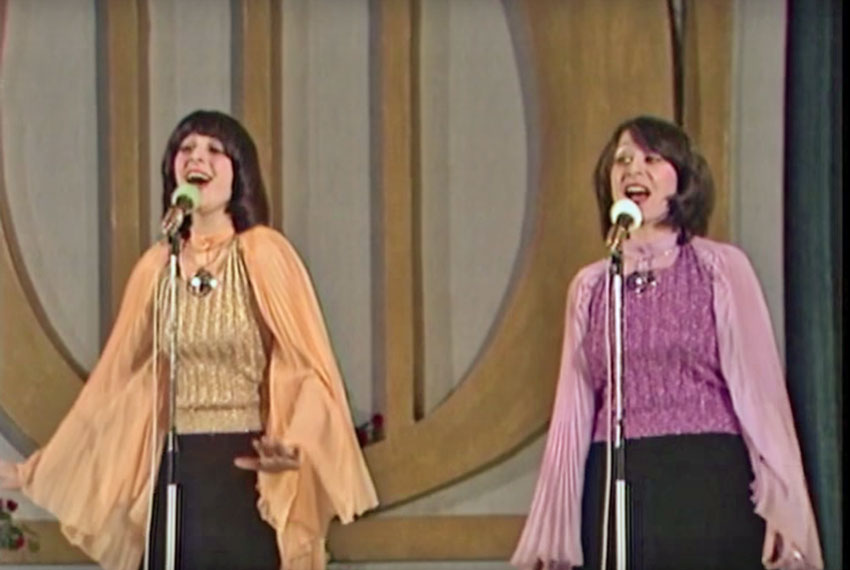 Martha & Tena released their third vinyl „Modré království“ (The Blue Kingdom) with many pop hits. In the Czech radio stations dominated big hit „Dirlada“. They performed at many concerts in Poland. 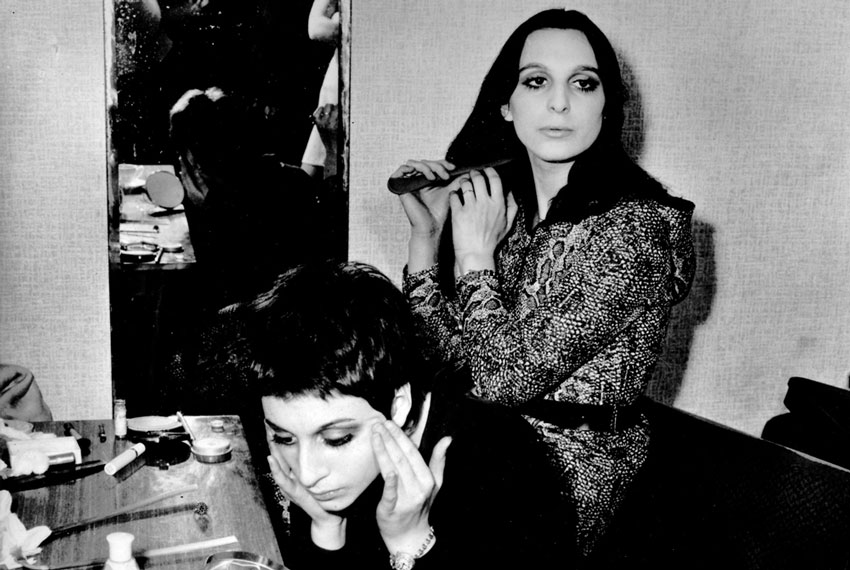 Martha & Tena were honored as the most selling artists by Panton record label. Their new EP album was called „Martha & Tena zpívají řecké písničky“ („Martha & Tena sing greek songs“).
Prague concert hall Lucerna sold out 5 times in a row.
They also performed on Europarty with the European music elite in Saint Gallen, Switzerland. Followed by performances in Zurich and Lake Constance, where they sang a favorite song of the Czech audience „Heart on the palm“.
They started to cooperate with Bob Frídl and the band Progress organization (later Progres II and even later Jan Sochor group).

Panton record label nominated Martha & Tena for the music festival „Bratislava Lyre“ as young talents. They performed song „To všechno bolo včera“ („That all was yesterday“) and got the silver prize in song contest.
After big success in Bratislava Martha & Tena performed in German TV show „Hits a go go“. This year they recorded their first album „Dál než slunce vstává“ (czech version of „Midnight Special“ song).
The album contains many pop-rock-beat songs and czech version of the world hit „El Condor Pasa“ too. 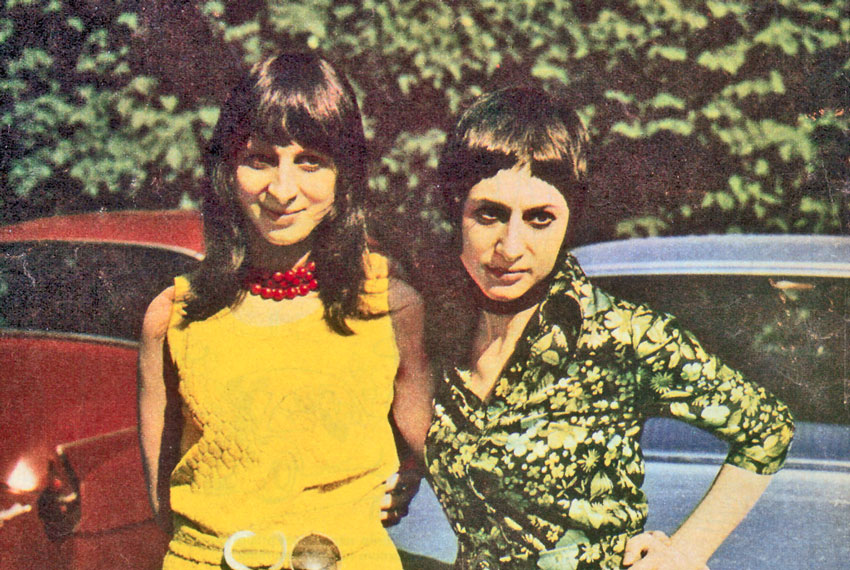 M&T performed on a concert tour of Karel Černoch in the Czech Republic and Austria.
Panton sent them as his new talents to the Lyre in Bratislava, where they performed in a non-competitive guest program.
He and Ales Sigmund invented the radio program „Hromosvod„. Martha sang to him the opening jingle, but mainly in the regular Saturday sessions in it herself featured young bigbeatové bands, such as Saturday, November 1, 1969 MS 16.35-17.00 group The Progress Organization.

M&T made their first recordings for Brno Radio and in the same year they released their first single with the song „Tam chtěla bych být.“

M&T won the competition „Hledáme nové talenty“ (We are looking for new talents) with the song „Něco se musí stát“ from the repertoire of the sisters of Dostál.
With the band Vulkán they participated in the 1st Czechoslovak Beat Festival in Prague’s Lucerna.
They appeared in the Apollo Theater show called „Apollo Presents“, in which they sang a block of songs mainly from the world repertoire of Everley Brothers and Sony & Cher (Then He Kissed Me, Little Man …). 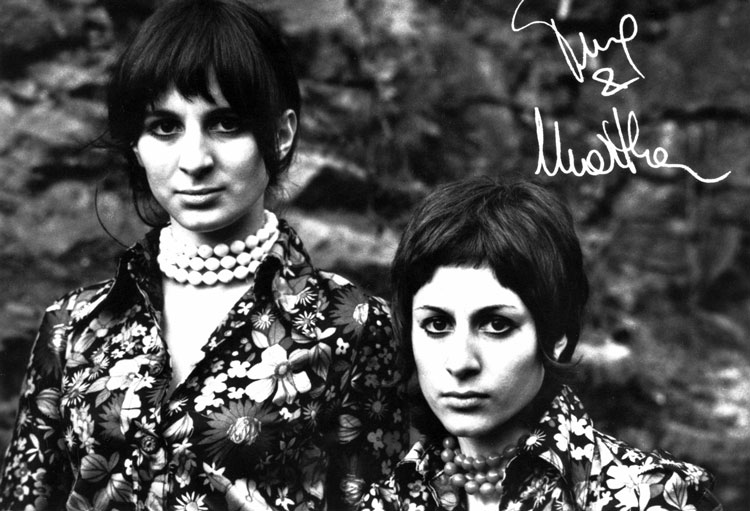 Elefteriadu sisters came to the Czechoslovakia as little children with their parents in 1950. Family escaped from Greece because of the civil war. 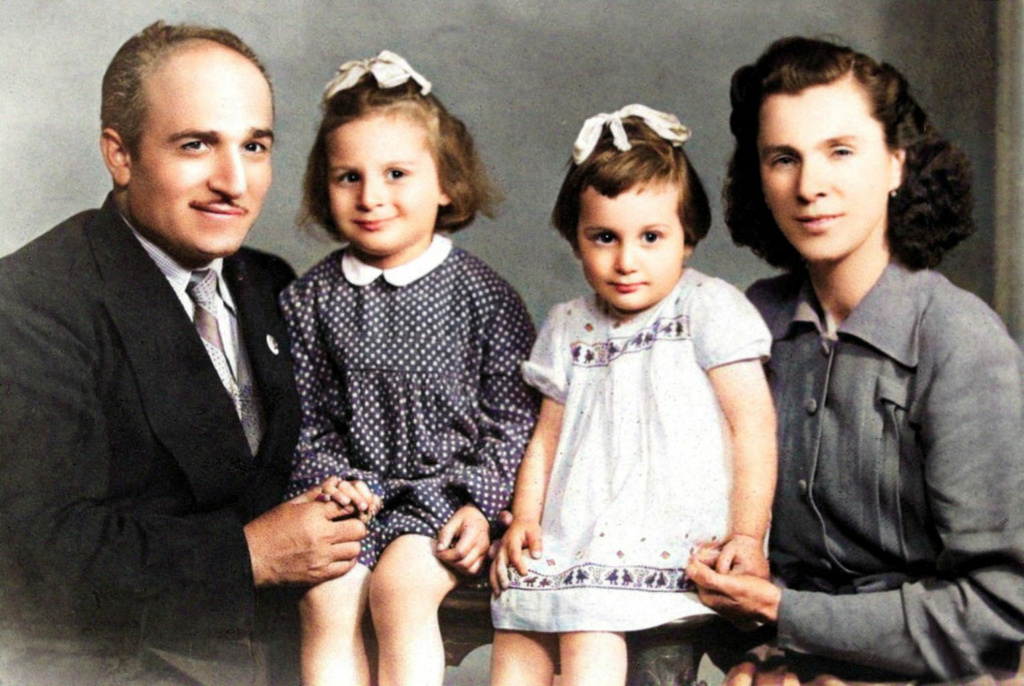